Amsterdam sets the benchmark for 'Green' cities across the world.

In going green, Amsterdam is a pioneer among the world's largest cities. At first glance, the old historic town crisscrossed with canals might not look like an ultra modern energy-saving metropolis (if you don't count the prominent presence of millions of bikes). If you look deeper, however, you will discover that the city is becoming super green, its infrastructure is being transformed into ultra energy-efficient and its households will soon become ecology's best friends.

In mid-2009, Nuon, IBM and Cisco commenced an innovative energy management project run in 500 households. Thanks to that system, the energy usage is to be cut by 14% and CO2 emissions are to decline significantly as well. Moreover, around 700 household have an access to financing by some of the Dutch banks to buy energy-saving appliances, from bulbs to roof insulation. Amsterdamers intend to cut their emission by 40% until 2025.

The city also plans to install several hundred power hookups for electric cars recharging and solar panels on townhouses. Until 2016, €100m a year will be spent for upgrading the electric networks to smart grids that will lower energy consumption. 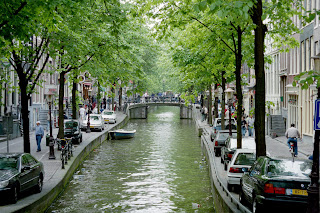