Saigas are antelopes that were once found from the western Europe, across the Eurasian continent and into Alaska. Their numbers were once in the millions only two decades ago. But today only less than 50,000 remain. This creature is very unusual in appearance because of it huge, inflatable, and humped nose which looks very similar to the nose of the tapir. Its very large nose makes the head look unusually large and bulging. Saigas are short with round bodies, thin legs, and a short tail. The average length is about 3.8 to 4.8 feet and the average height is about 2.5 feet. They can weigh up to 112 lbs. They are very good runners and can reach up to 80 miles per hour in a short time. During migration, they can swim across rivers. Their coats are thick with bristly hair to protect them from the cold environment. During the warmer season, their coats get shorter and lighter in color.

Saigas have suffered from habitat degradation and disturbance by humans, severe poaching, drought, and disease. The Mongolian subspecies (S. t. mongolica) is said to be the most threatened and endemic ungulate species. Only two populations of this subspecies survive in the Great Lakes basin area of Mongolia. Its population is currently at less than 1500 and is said to be decreasing due to the absence of conservation measures and poor climate conditions. Some are still hunted for their horns which have medicinal value. Although the international trade and hunting of all saigas has been banned, law enforcement is difficult in the areas where remaining populations are found. 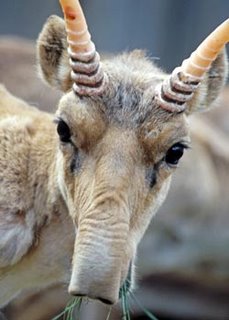