Will we have to travel in boats in the future?

The Sea level is predicted to rise as higher temperatures expand the volume of ocean waters and melt the snow and ice situated on land masses, particularly Greenland and Antarctica.
Over 20 different GCMs (general circulation models) predict that the sea level will rise by 0.2 m to 0.5 m from 2000 to 2100. These models usually assume that glaciers will keep flowing (moving) at their current speed. Recent observations in Greenland, however, have shown that glacial flows are accelerating. The likely mechanism is that as temperatures increase, the ice along the edges of a glacier melts. This water makes it way to the bottom of the glacier and acts as a lubricant that accelerates the ice flow. An alternative forecast, which takes this phenomenon into account, predicts an even greater change in sea level: the sea level in 2100 will be 0.5 m to 1.2 m higher than in 2000.
A rising sea level will put coastal regions of the world at great risk. Cities with large populations, such as those along the Gulf and east coasts of the United States, will be inundated. Bangladesh, one of the world’s poorest yet most populous countries, is perhaps the most vulnerable to sea-level changes: about 80% of this country is below 10 m in elevation, and so a 0.5 m to 1.0 m rise in sea level will permanently flood between 6% and 10% of its land area and displace between 3.4 million and 17 million people. In addition to worldwide flooding, the rising sea level may threaten the fresh water supplies of many coastal regions with contamination by seawater. 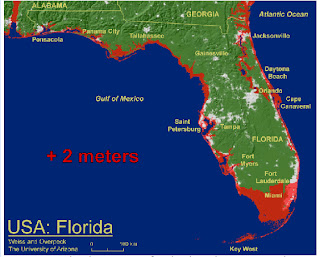 This is an excerpt from the book Global Climate Change: Convergence of Disciplines by Dr. Arnold J. Bloom and taken from UCVerse of the University of California.
Posted by earthian at 03:37