Power of the Sun!

Solar heating systems can provide over half of households' hot water needs, according to the largest ever field trial of the green energy devices.
But the year-long study, undertaken at 88 homes by the Energy Saving Trust, also reveals that the solar water heating systems will save most owners just £55 a year despite costing between £3,000-5,000, prompting calls from green campaigners for clarity on government subsidies for them.
Residential payment levels under the government's £860m renewable heat incentive (RHI) scheme, announced in March, are not due to be announced until 2012. But if on a par with those for large-scale solar heating systems, householders could expect payments of around £96 annually. The true figure is likely to be higher because smaller installations will probably attract bigger subsidies.
The trust also revealed that, between 1 August and 9 October this year, 707 people took out new £300 grants for solar thermal systems. The government has put aside £15m for the renewable heat premium payment (RHPP) scheme, which runs until March 2012 offering grants for a range of green heating technologies including groundsource heat pumps and biomass boilers. The separate RHI payments, similar to those made to owners of solar panels and wind turbines under the feed-in tariffs for green electricity generation, will launch after the RHPP.
Solar water heating systems work by using the sun's energy to heat water or anti-freeze in collectors on the roof of a building. The heated water or anti-freeze is then usually pumped to a hot-water cylinder to be stored until the hot water is needed.
Overall, the trust said it was impressed by how well solar heating systems were working in the UK. The field study found the systems provided a median of 39% of households' hot water needs, rising to 60% for the best and plummeting to 9% for the worst-installed one. The trust had previously believed around 35-40% would be a typical figure, based on laboratory tests.
Jaryn Bradford, senior technical manager for the Energy Saving Trust, and author of the report, said: "This is a technology that works, and works well in the UK." He said the main impact on a system's performance was how well insulated the home's hot water tank and pipes were. 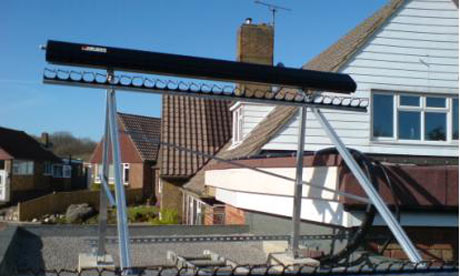