A Spoonful of Help!

A group of spoon-billed sandpipers has arrived in the UK as part of a captive breeding programme to bring the bird back from the brink of extinction.
The 13 young birds have arrived at the Wildfowl and Wetlands Trust's (WWT) centre at Slimbridge, Gloucestershire, in the final leg of an epic journey which has brought them from the species' Russian breeding grounds.
The birds were collected as eggs in Russia as conservationists from WWT, Birds Russia and the RSPB mounted an emergency rescue mission, before being hatched in captivity and kept in quarantine for a month in Moscow zoo.
They have now been flown to the UK and taken to Slimbridge, where they will spend another 30 days in quarantine, to form the basis of a captive breeding programme.
The critically endangered spoon-billed sandpiper, one of the world's rarest birds, had seen its population fall to an estimated 120-200 pairs in the wild by 2009.
Numbers are thought to be declining by around a quarter each year owing to very low survival rates of juvenile spoon-billed sandpipers and conservationists warn the bird could go extinct within a decade without swift action to help it. 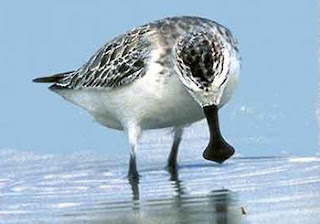