Victoria's eco-achievements might not be as impressive as Malmo's or Masdar's eco developments, but still, the city deserves a mention here. Victoria, the capital city of British Columbia in Canada, has committed itself to implementing innovative eco solutions that are to be reflected in such areas as public transportation, green building, energy saving projects, recycling systems and waste reduction programs.
Firstly, Victoria has green principles for city planning. It supports the development of a Civic Green Building Policy. The scheme requires all new construction of civic facilities to be the so called LEED Silver standard, i.e., to put it simply, cut energy usage by 31% and water usage by 22%.
Secondly, for several years now, Victoria has been implementing the waste reduction program with the aim of reducing and recycling as many organic materials as possible.
Victoria has hoped to be carbon neutral by 2012, and introduced the first hybrid double-decker buses in North America. Victoria is also covered with extensive bike routes - not without reasons it is called the "Cycling Capital of Canada". The city's traffic lights has been changed over to light emitting diodes (LEDs) in order to lower the consumption of electricity and it has also replaced the lighting in the buildings with more energy efficient lights. 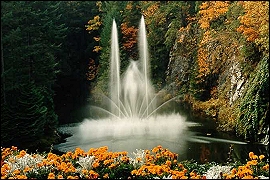