The Aghori or Aghora are a Hindu sect believed to have split off from the Kapalika order (which dates from 1000 AD) in the fourteenth century AD.

Many mainstream Hindus condemn them as non-Hindu because of their taboo violation of orthodox practices.  Aghoris or Aughads command extreme reverence from rural populations as they are supposed to possess powers to heal and relieve pain gained due to their intense practices. Aghori are denizens of the charnel ground.

The Aghoris are prevalent in cremation grounds across India, Nepal, and even sparsely across cremation grounds in South East Asia. The Aghoris distinguish themselves from other Hindu sects and priests by their alcoholic and cannibalistic rituals (see necro-cannibalism). The corpses, which may be either pulled from a river [including Ganges] or obtained from cremation grounds, are consumed both raw and cooked on open flame, as the Aghoris believe that what others consider a "dead man" is, in fact, nothing but a natural matter devoid of the life force it once contained. 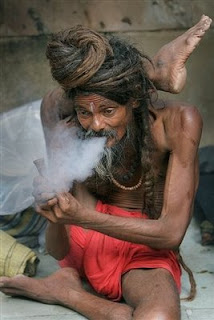